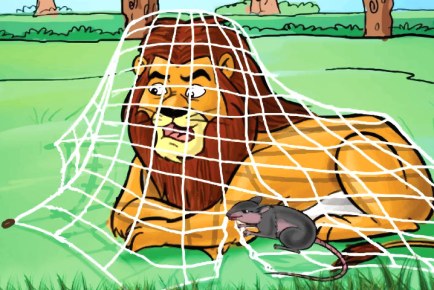 The Weak overcomes the strong; the soft surpasses the hard. In all the world, there is no one who does not know this, but no one can master the practice.

While the “original” text as translated by Gia-Fu Feng and Jane English in Lao Tsu – Tao Te Ching was thus:

Under heaven nothing is more soft and yielding than water.
Yet for attacking the solid and strong, nothing is better;
It has no equal.
The weak can overcome the strong;
The supple can overcome the stiff.
Under heaven everyone knows this,
Yet no one puts it into practice.
Therefore the sage says:
He who takes upon himself the humiliation of the people
is fit to rule them.
He who takes upon himself the country’s disasters deserves
to be king of the universe.
The truth often seems paradoxical.

We’ve always been taught that life is the “survival of the fittest”, that “only the strong survive”.

Our world is changing at what could be considered an alarming rate by some.

Things are being turned on end.

This is a notion that was reinforced for me while listening to Lee Harris’ Energy Update for July this morning.

Change is becoming the order of the day.

That is not to say that change is “new”, per se. Nature is change. Change is a natural part of life.

It is to say, though, that the old paradigms are crumbling from within. Those who hold fiercely on to the belief that there is a superiority in physical strength are going to be in for a startling wake-up call.

The “new” strength of be-ing is found in those who are able to feel and outwardly express compassion, who are able to connect and work with others in a symbiotic manner emotionally (and spiritually) as well as physically, and who fully embrace the idea of “service to others” versus “service to self”.

Just my two cents and reflecting that which is bubbling up from within the depths of mySelf.

Peace and love be with you, my dear friend.

This site uses Akismet to reduce spam. Learn how your comment data is processed.

← The Tao Te Ching: Compassion Wins Rise and Shine! Time to Get to Work →

As an Intuitive, Energetic Healer, and “Mistress of the Woo”, Dawna uses her spiritual gifts, creativity, and 20+ years’ experience in personal and spiritual development to empower others to create greater health, happiness, and harmony in their lives.